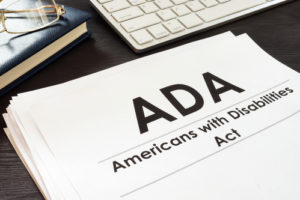 For better or for worse, the U.S. Supreme Court will hear arguments on two cases this Fall that could have a significant impact on the interests of deaf and hard of hearing people. One case I think will help, or at least not hurt. However, I’m worried about the other.

The case I feel good about is called Cummings v. Premier Rehabilitation. A Deaf woman in Texas needed physical therapy, but when she asked for interpreters, the facility refused, not once but twice. She filed a lawsuit.

The center’s refusal to provide interpreters is clearly against the law. The Americans with Disabilities Act (ADA) requires virtually all businesses open to the public to provide and pay for “effective communication.” Another law, Section 504 of the Rehabilitation Act, requires businesses that receive federal funds, including any health-care provider that accepts Medicare or Medicaid payments, to do the same. So with that double-barreled mandate, you’d think her lawsuit would be an easy success.

Not so, though, because of quirks in the two laws. The ADA does not permit private individuals to recover damages, only to get an order, an injunction, telling the business to do it right next time. But sometimes, there won’t be a next time, such as when somebody is travelling far from home or when, as in this case, the patient has fully recovered. And courts won’t decide an issue in the abstract — unless the plaintiff is asking for a remedy that the court has the power to grant, it’s “case dismissed.”

What about 504? It does permit a private party to recover damages. The plaintiff didn’t lose any money and wasn’t physically injured, so she sought damages for “emotional distress,” basically, the kind of feelings we all have if we’re told we’re not wanted.

That decision runs counter to a large volume of case law involving all manner of civil rights. While “emotional distress” may not seem like a big deal, allowing damages for that is basically providing a way for courts to deal with cases where people are wrongly excluded. The fundamental purpose isn’t so much to compensate the person excluded as to deter the businesses from excluding them. Our concern is that if this case stands up, it can permit certain businesses in certain situations to flagrantly violate the law, as the business in this case did, but sustain no consequences whatsoever.

That is the case the plaintiff took to the Supreme Court. The Supreme Court decides what it wants to decide, and takes very few of the cases presented to it. But it did take this case, and most of the time, the Supreme Court takes a case to tell the lower courts they were wrong, not to say “good job.” So we feel good about this case. ALDA joined an amicus curiae (friend-of-the-court) brief urging the Supreme Court to permit those kinds of damages, and in another encouraging sign, the Department of Justice also filed a brief urging that outcome.
Because the decisions being reviewed run contrary to what almost all courts have considered settled law, striking down those decisions won’t help us, but affirming those decisions and turning them essentially into a nationwide rule would be a real concern. Oral argument to the Court is scheduled for Nov. 30.

I’ve reported in past issues about a case in Seattle, Schmitt v. Kaiser Foundation Health Plan, that could require health insurers to cover hearing aids and audiology services. The case claims that the essentially universal exclusion for those items violates the prohibition in the Affordable Care Act (ACA) against discrimination due to disabilities. The insurance company said the exclusion is okay because it applies both to people with a disabling and a non-disabling hearing loss. The courts agreed, but the appeals court said the trial court had to give the plaintiff another chance to show that the exclusion “predominantly” affects people with disabilities.

That seems, on the surface, to be an easy argument. The ACA borrows the definition of “disability” from the ADA, namely, an impairment that significantly limits a major life activity, and those include hearing, learning and working. Our contention is that there is nothing inherently cool, or fun, or desirable about hearing aids, so almost nobody would buy them unless they were experiencing limitations in their own lives.

Now here’s where the Supreme Court got involved in a way that could be troublesome. The Supreme Court also decided to consider a case called CVS v. Doe. In that case, some people living with HIV sued CVS in its capacity as a pharmacy benefit manager over its policy that certain specialty medications like those used by HIV patients must be mailed rather than picked up at a neighborhood pharmacy. That policy, they argued, disproportionately harms people with disabilities by depriving them of the kind of personal counseling and attention they can get at a local pharmacy. The Ninth Circuit court agreed with them, but the Supreme Court wants to take another look, and as noted, that’s usually bad news for people who liked the lower court’s decision.

So what does that have to do with the Washington hearing-aid case? We don’t really know at this point. The argument in the CVS case is that the company’s policy is illegal because it has a greater impact on people with disabilities than on other people, and the question the Supreme Court will consider is whether this disparate impact is enough to make a policy impermissible. The Washington case did not argue disparate impact, but instead argued that because the exclusion almost exclusively impacts people with disabilities, it is in fact a form of intentional discrimination and not just an incidental byproduct of a neutral policy. The problem is how to draw the line between policies that incidentally affect some people with disabilities and policies that affect almost nobody else.

Our concern is that if the Supreme Court rules for CVS, it may make a broad enough ruling that it will adversely affect the Washington hearing-aid case as well. The Supreme Court is going to hear arguments in that case on Dec. 7. I’ll be watching closely and will keep you posted.