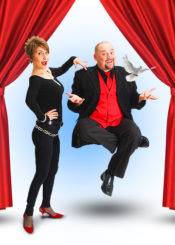 ALDA is proud to announce that our entertainment for the ALDAcon Friday night banquet will be the world-renowned Deaf magician, “Magic” Morgan! His wife Liliana will also be joining the performance.

Matthew “Magic” Morgan has had a long, storied career that started when he was six years old. After learning a coin trick from his grandfather, who had worked during a carnival at one time, Matthew began performing and hosted his first show, charging neighborhood kids 25 cents. When he was 11, he got paid to perform at a church …his FIRST paid magic performance! He, of course, used this money to buy more magic supplies.

Liliana, born in Russia, has been delighting audiences throughout Europe for more than a decade. Her appearances on stage incorporate Russian culture and dance. It was at one of Matthew’s performances in Russia that she met, and eventually married, Matthew. Join us for this “Magical” evening!