Article originally posted on the Houston Chronicle by Brittany Britto. They have graciously allowed us to share it here as well. 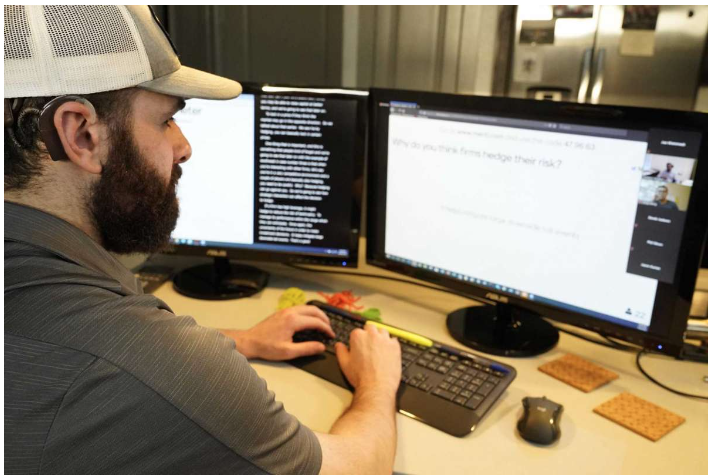 Picture: Jon Weintraub, a Rice University business graduate student, who is deaf and has a cochlear implant, uses a closed captioning provider for his online courses Wednesday, April 8, 2020, in Houston. Social distancing and other protocols required during the COVID-19 pandemic have been particularly difficult for people who are of deaf or hard of hearing Photo: Melissa Phillip, Houston Chronicle / Staff photographer

“I was like ‘Oh my God. How am I going to do that?’” he said of the online classes hosted on Zoom. “It’s hard enough trying to be in a classroom.”

Despite not having issues with his in-person classes at Rice’s Jones Graduate School of Business, Weintraub who is deaf, said online courses on Zoom were trying.

The first six hours of online coursework were the most brutal, Weintraub said. He sat in front of the screen, disengaged, obtaining little information, and tried to view a class with a fellow classmate before deciding he had to go to campus where his professor was filming the class live.

“I just wanted to sit in that classroom just to get something out of it and not fail it,” said Weintraub, who will graduate with a master’s degree in business administration this spring.

During the COVID-19 pandemic, colleges are learning about the extra assistance and needs of disabled communities with online learning. For the deaf and hard of hearing, captioning services and other accommodations are paramount.

A week before city officials announced the stay home order, Rice officials arranged for Weintraub to sit in the room while the professor filmed more than 20 feet away.

“What we quickly realized is part of what enabled him to be successful was being in the room and seeing the professor face-to-face,” said Adam J. Herman, the executive director of the student program office for Rice’s graduate school of business.

Within a week, Rice hired a closed captioning provider through Capture-It Unlimited Inc, a company that contracts captionists throughout the region, including at about 10 higher education institutions within Harris County and surrounding areas.

Weintraub now works with a captionist who provides real-time transcriptions during his online courses and works with him in breakout sessions on Zoom.

“It’s almost identical to watching a movie and putting on the subtitles or closed captioning,” said Weintraub, who is currently the only student at Rice using the service, Herman said. 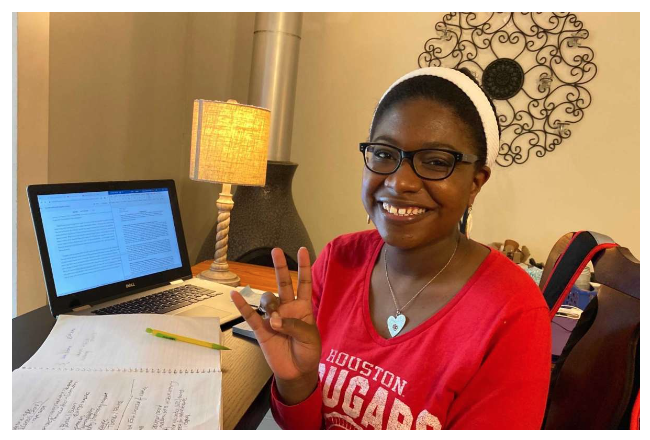 University of Houston student Gracie Baltazar, who is deaf, works with a captionist who transcribes her recorded online classes so that she can read them later. Baltazar said she was originally nervous when UH announced classes were converting to online, but added that she has received great support from her professors and classmates. Photo: Courtesy of Gracie Baltazar

Gracie Baltazar, a senior psychology major at the University of Houston, sends recordings of her online classes to a captionist at UH, who transcribes them within a day. The process, she said, has put her at ease during the transition to online classes.

Like Weintraub, Baltazar said she felt immense anxiety when UH announced that it would move courses online. It’s a format she’s been avoiding.

“I thought it’s just my fear coming true,” Baltazar said. Though she got a cochlear implant at age 3, which allows her to pick up certain sounds and pitches, deeper voices can be difficult to decipher.

Suddenly, all of the strategies Baltazar had used since middle school to understand the hearing world around her — like sitting in the front of class, asking professors to face her, or working with a captionist in-person during class — would become obsolete over the internet.

But Baltazar said she received immediate support from UH’s Center for Students with Disabilities, who contacted her about the changes, listened to her worries, and communicated with her professors. She said her professors and classmates have also worked to accommodate her by speaking slowly during class discussions or looking directly into the camera so that she’s able to read their lips.

“Everyone has been patient with me,” Baltazar said. “Even though I was scared and nervous, everything has worked out.”

Cheryl Spadaccia, director of UH’s Center for Students with Disabilities, said many students with disabilities have requested new accommodations as courses shifted online.

UH communicated its options and resources for students with disabilities within a week of classes transferring online and was using automated captioning services for its lectures and courses up until Wednesday, April 8, when a student requested live interpreters, Spadaccia said.

Before the COVID-19 pandemic, 30 deaf or hard of hearing students at UH were using services to assist them in their in-person classes, said Christie Youngblood, an interpreter at UH.

The 25 remaining students are using automated captioning services, which can come with its own set of complications, said Leah M. Halm, vice president and services coordinator of Capture-It Unlimited.

“I don’t feel the students are getting the quality that they would get having a live person providing real time captions,” Halm said. Like auto-generated captions on YouTube, automated captioning services can lack punctuation or fail to pick up technical terminology, she said.

As most of the company’s in-person captioning business has declined, it’s seen an uptick in its remote services for online classes, she said. .

In addition to automated captioning, UH professors are trying PowerPoints and recording voice-overs for classes, Spadaccia said. And many are attempting to speak slower so words are picked up by captioning software.

Having a hearing disability during this pandemic has had its difficulties outside of the classroom as well.

“I’ll be honest, this whole coronavirus thing is such an ‘F you’ to the (hearing impaired),” Weintraub said. “It’s like taking away their one form of communication, so that’s definitely been kind of a struggle for them.” 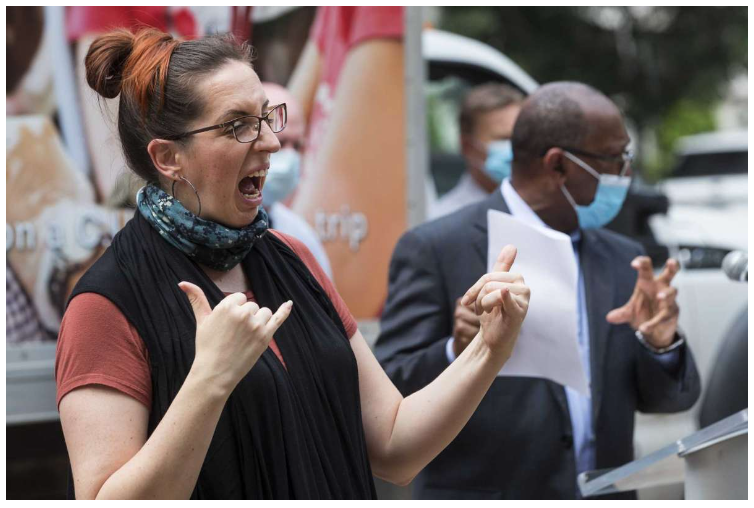 The social distancing and self-isolation protocols can be particularly difficult because it limits human interaction and the ability to see people face-to-face — major aspects of communication for those with hearing impairments, Weintraub said. Masks make it difficult to read lips or facial expressions.

“Facial expressions communicate a whole lot. It’s not just the hands and the fingers. It’s the face, the hands, the torso, all together,” said Heidi Rose, who chairs the communication department at Villanova University and has researched deaf culture and ASL for years.

Access to information and healthcare can also be an issue, Rose said. 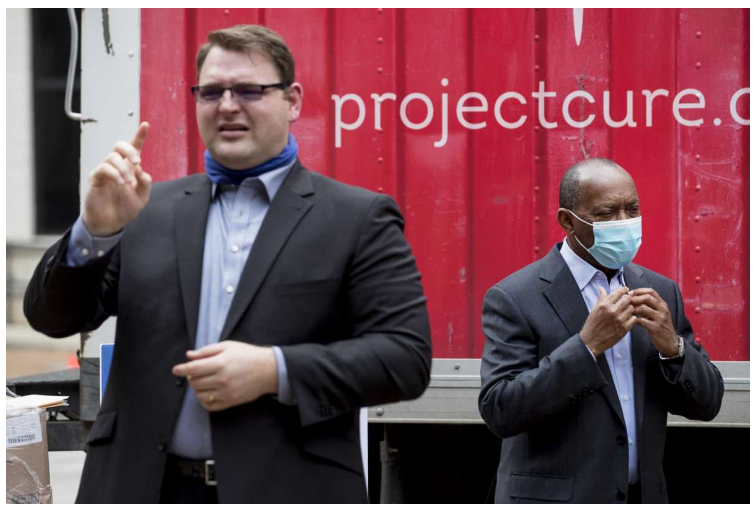 Many news briefings, including the daily COVID-19 news briefings from the White House, do not have an ASL interpreter to sign the information — forcing the deaf or hard of hearing community to rely on closed captions, which are often inaccurate or delayed. In other cases, closed captioning places the impetus on the reader to translate the information from English to ASL — a struggle for those who are fluent in ASL, but not English, Rose and Baltazar said.

And yet another problem: local televised news briefings with an ASL translator do not guarantee enough screen time to comprehend what’s being said. Baltazar said she has watched briefings where broadcasters zoom in on Houston Mayor Sylvester Turner’s face, cutting off the ASL interpreter from the screen entirely. 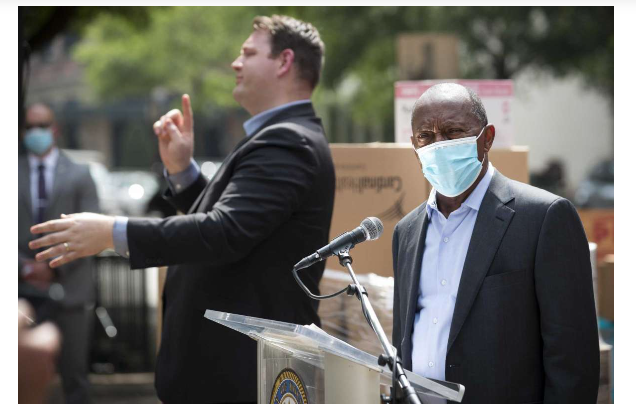 “This situation has really revealed a glaring omission” for the deaf and hard of hearing community, Rose said.