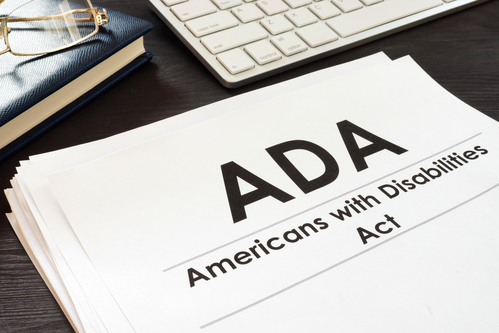 This week, we celebrate the 32nd anniversary of the Americans with Disabilities Act (ADA), a piece of bipartisan legislation aimed at enabling people with all types of disabilities to live in the world on the most equal basis possible. For those of us with hearing loss, the benefits of the ADA have been enormous – captioned television and movies, interpreters in court and in hospitals, and reader-boards with captions at many sports venues, to name just a few.

But the ADA is not self-explanatory. While it sketches out broad objectives, it contains very few specific provisions. Indeed, and most of its provisions dealing with hearing loss are written in adjectives – we are entitled to “effective communication” that provides us with “equal benefits” and “meaningful access,” unless providing that would impose an “undue burden” on the business. Because those terms aren’t precisely defined in the law, our rights in any specific situation are pretty much what a court or administrative agency says they are, which is why we need to pay attention to what the courts and agencies have done for or to us.

In prior newsletters, I reported on the first deaf-rights case to reach the U.S. Supreme Court. A rehabilitation facility refused to provide ASL interpreters for a deaf patient, in flagrant violation of both the ADA and a provision of the federal Rehabilitation Act that prohibits disability discrimination by businesses that receives federal funds like Medicare and Medicaid payments. So the question wasn’t whether the facility discriminated, but whether there was anything the courts could do about it.

The only remedy available to private individuals under the ADA is an order to do it right next time, but since the patient got better, there wasn’t going to be a “next time.” So here, the plaintiff looked to the Rehabilitation Act, which does permit private parties to recover money damages. But as is frequently the situation in disability-rights cases, nobody was physically injured, nor did anyone lose any money. What the plaintiff asked for was “emotional distress” damages, which one court aptly described as the injury “a decent and reasonable individual would suffer when faced with ignorant behavior.”

Although courts have almost universally allowed damages of that nature, the Supreme Court refused. It said that when a business takes federal funds, it must accept the conditions under which those funds are made available. However, the Supreme Court said the business must understand the terms of that bargain, and there was no indication that the business knew that if it accepted federal funds, it might be liable for “emotional distress” damages if it discriminated against people with disabilities.

This ruling is very concerning. The concern is not that victims of discrimination will lose lots of money – “emotional distress” damages are usually extremely modest. Rather, the concern is that some of those people will lose their ability to get into court at all, which, in turn, would mean that some businesses could flagrantly ignore their accessibility obligations without fearing any consequences.

As I’ve also reported in the past, courts are all over the map on the question of whether the ADA accessibility requirements applicable to “places of public accommodation” also apply to websites. One federal Court of Appeals reasons that since websites are the “places” that essentially everybody “visits,” albeit virtually, the websites must be subject to the same obligations as physical brick-and-mortar stores. Other courts have taken a more intermediate approach, and have said that websites of any business with a physical location open to the public must be accessible, pointing to the ADA requirement that services of places of public accommodation must be accessible no matter where or how those services are delivered. And one court recently went off the rails and declared that websites seldom have to comply with ADA access requirements. (Through some judicial sleight-of-hand, that case has essentially disappeared).

For us, the issue is almost always whether the website’s aural content needs to be captioned. Fortunately, that’s no longer particularly difficult or expensive. Automatic speech-recognition programs can do a lot of the work, and if the ASR-generated captions are then read, edited and corrected, they can be made essentially perfect.

This is a continuing question that obviously requires a solution, and the question is who should decide. Often, when different federal courts reach different conclusions, the Supreme Court decides, but I’d hate to see this Supreme Court decide a matter of such importance. Another possibility would be for the federal Department of Justice (DOJ) to issue a regulation, as it has done for movie captioning, and indeed, the DOJ has come down strongly in favor of requiring website accessibility.

A third possibility is the Congress could require website accessibility. Given the current state of polarization and near-paralysis, that wouldn’t normally seem possible. Yet there are reasons for hope. The business community has backed a bill that would require “consumer-facing” websites to be accessible, but that bill says that anyone claiming a site is not accessible must notify site owner, provide an opportunity to fix the problem and then complain to the Department of Justice before filing a lawsuit, requirements that could hobble private enforcement of the ADA. The disability rights community wants accessibility, but opposes the prior-notice requirement, at least the way it is written in the business-backed measure. One suspects that if neither side insists on getting everything and giving up nothing, a deal may be possible. Stay tuned.